December 21st. Four more days. A bit of wrapping to do. Groceries to buy before the weekend in which I do not want to set foot into a store. Tidying up the office that is our occasional guest room in preparation for Dad & Mom's arrival on Monday. A few gift baskets to make and some cookies to make with the kids today. Tonight, D & I are having an evening out, probably just shopping and snacks at a pub, but a bit of us time that will be nice.

The girls finished school yesterday and M has been announcing all morning that as there is no school she has an important job to do, playing with her Barbies. A meanwhile decided that Willow the hamster needed some exercise and so I have been visited by her a few times. R is just enjoying a day with no responsibility.
The house is cozy, the music for church this week prepared and as of last night rehearsed. And today I was looking at the tree and thinking on the star, and a story referred to but not written down. So here is the story as I know it. Short, but it has reached almost legendary status in our family.
Christmas 1961: Dad and Mom's first year married. They were newlyweds, money was tight, but there was a tree to find a top for. Dad went out to the store and found one, and brought it home. Mom became quite upset on 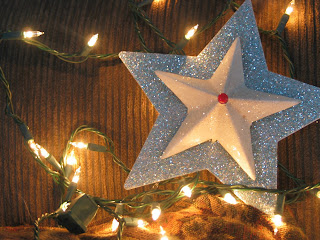 seeing how much money he had paid for it. How could he spend so much on just a tree star? Sure, it's pretty, but the money could be used on other things! But just look at it - all silver glitter, lit up from inside, "with sparkling halo effect!" the box triumphantly declares. So pretty! So much money! Even so, the star was kept and continued to grace their tree for years to come. Last year when they downsized and moved into an apartment, it came to my house and took its place on our tree. It spent 45 years on their trees and now is in our house for the second year.
The box still bears the price sticker: $2.50.
I emailed my dad this week and asked him if he could remember why he chose that particular one, why he, who has always been in my mind careful with money, would put out such a scandalous amount of cash for it. His response: "It being our first Christmas, I was probably still so awestruck by your mother's beauty that I wanted something really beautiful to complement her." I love that he would say that after 46+ years of marriage.
So the star sits on our tree. If it could talk, what stories it would have to tell! Four more days until it has tales of another Christmas.
Posted by barb at 09:19

I just told Ben that story yesterday. It's a good one.

What a great story! And I love that the box still ahs the price on it.

I just saw your Christmas letter; what great photos of the girls!

your dad is still the king of romance!!!