I love prosciutto. So when I happened across a recipe for duck breast prosciutto in a magazine, and - hey! - we had ducks aplenty, I decided it had to be tried. And I am so, so glad I did.

Prosciutto, bought in the store, is pork - the word in Italian, according to google translate, means "ham". Further research (you don't think I make these blogs up, do you? No, they are meticulously researched, often by asking my dog. Titus is a wealth of information. Though in this case he just looked at me and whined for some of what I was making. But I digress) suggests the word refers to the dry curing process of making prosciutto. It's typically ham that is dry-cured, then served raw.

It's ridiculously simple, only requiring two things I often lack: patience, and space in the fridge.
Duck breast - I used four halves from this year's eleven ducks - entombed in kosher salt for 24 hours. That's it. Salt and duck. See? I said ridiculously simple.


After its salt bath, the duck was rinsed well, patted dry, then covered in freshly-ground black pepper.

How much? Basically, you cover it with pepper until you think you have enough, and then add some more. Because it's good.

Then each duck breast was wrapped up in cheesecloth, bundled and wrapped again, then trussed with string to hang in the fridge for two weeks. Yes, two weeks of needing space in my fridge for some meat to hang.

Thank goodness for the second fridge. True prosciutto often ages for 18 months or more. I'd never make it, waiting so long.

But worth it? Oh yes.

Today the meat was cut down, unwrapped, and sliced as thinly as I could. The drying concentrates the flavour of an already tasty meat. The rich red of the meat and creamy white of the skin are a lovely contrast. It is decadent. I repeat: yum.

How to use this loveliness? There are so many ways. My favourite is to just eat the stuff.

But it's a wonderful appetizer with baguette slices and some cheese. It's delicious cut up, sauteed, and added to pastas or Caesar salad. If it can be very thinly sliced, it is lovely wrapped around blanched asparagus. Or, you could just eat it. Which I did.

Ten years
is a decade
seems a long time
is a tenth of a century
is a crawling long time
is gone in a flash and scenes are as scathingly fresh as they were on that day.
how can it be that long since he left us?

No more words today. I can only reiterate.

so here we are again
same place, different time
trying to pin it down
and failing gloriously

but isn't about glory?
and don't all roads lead here?
grand avenues, twisting alleys
boulevards on which you simply must be seen

so here we are again
thought we were going away from it
when we were in
things made sense, somehow

I strike out in new directions
running madly anywhere else
but wait, around the corner,
is that up ahead?

so here we are again
and I know you're waiting
as I look down a road
wondering if it leads, finally, out

Email ThisBlogThis!Share to TwitterShare to FacebookShare to Pinterest
Labels: thinking

Once upon a time, I bought a whole ham, bone-in. It cost about $16. So I decided to make a week of it. Because it's the sort of thing I like to do, often for no apparent reason. This is the story of the ham.
Day 1
The whole ham would be roasted in all its glory. I cut off the plastic to find cheesecloth around the whole thing. I've never seen that before, but cheesecloth has a sort of small-scale artisan-created sense about it when it's around food (though I could be biased, having just wrapped some duck proscuitto in cheesecloth to cure). So in a completely arbitrary way, finding cheesecloth around the ham was encouraging. But I figured it shouldn't be roasted so I removed the cloth, scored the thick skin, and popped it in the oven. Uh... 375F for a couple of hours? I forget. This isn't a recipe.

Some maple syrup and brown sugar were added later for two reasons:
This made a dinner for five, a slice of the ham along with small red potatoes (boiled and then sauteed in a bit of duck fat for flavour) and Swiss chard (sauteed with bacon and mushrooms) from the garden.

And then the once-majestic ham looked like this:
Day 2
After a chilly night in the fridge, the ham came out to be sliced. Cold slices on dark rye bread with grainy Dijon mustard and some baby greens gleaned from the garden - spinach, chard, and beet greens - served with boiled corn on the cob I picked from the field.

Corn! When it's picked mere minutes before it's boiled, the sugars in the plant haven't yet converted to starches and OH the sweetness. Yum. Simple but so good.

The ham is disappearing fast.

Day 3
Due to popular request at supper last night, I sent ham on rye for three work/school lunches.

Pasta took the lead tonight, penne with an alfredo-style sauce (basic white sauce with garlic and Parmesan) and chopped ham warmed up in the sauce. This served four, with leftovers for D to take to work tomorrow. So altogether, five meals this time. 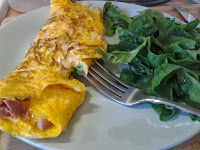 Two more sandwiches, this time on homemade whole wheat bread, for school lunches. I'm having to get creative now while I slice it, to avoid the bone that runs through it.

This evening - omelets. Bright yellow thanks to eggs from free-range hens who are loving the grass on their pasture these days. With, for a change, ham. We're at the end of this puppy. If the ham was a puppy. Which it's not, to be clear.

Speaking of the puppy, he has watched the ham decimation with marked interest.
Day 5
Waste not, want not, and all those proverbs. The ham bone went into a pot of water with onions, a few cloves, peppercorns, and a bay leaf. And there it simmered, leaching the last bits of its flavour to make stock. Onions were cooked in bacon and the stock added, along with potatoes and dried split peas. Cozy soup was a great finish to the week. 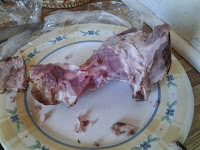 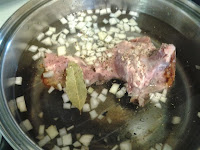 Our meat purchase for the week (30 servings, between suppers and lunches): $16. Not bad.

And puppy was finally happy. 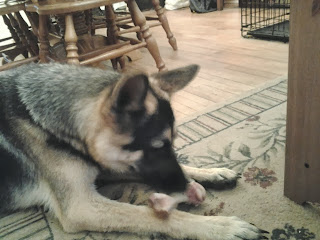 Summer on the farm is wonderful but also tends to take me waaaaay off track of other things I do. I don't want to heat up our little kitchen any more than is necessary, and cooking is often a quick grab of things from the garden. While this is a blessing that we are so grateful for, it unfortunately meant I missed a couple of challenges, but I was able to get back on track this month and make something I've wanted to make for a while: gnocchi.


Todd, who is The Daring Kitchen’s AWESOME webmaster and an amazing cook, is our September Daring Cooks’ host! Todd challenged us to make light and fluffy potato Gnocchi and encouraged us to flavor the lil pillows of goodness and go wild with a sauce to top them with!

We planted potatoes for the first time this year, and had harvested over a hundred pounds of Russet baking potatoes that were sitting in the cellar. I brought up a few, scrubbed and baked them, and then left them to cool. Perhaps for too long, because when I tried to put them through the ricer I'd bought for the purpose (though, granted, it'd been on my want list for the kitchen for a while), the handle bent while feeding a very few potatoes through the little holes. Time to improvise.

I didn't want to use a masher, preferring to try to keep them a nice light texture, but with my poor ricer looking all askew and sad, the only other option was:  a pastry blender. I hoped that the thinner blades would mean the potatoes didn't clump up as much. And, as it turned out, it wasn't ideal but the dough came together very nicely - just the potatoes, egg, flour, and salt and pepper. 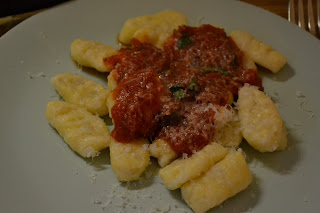 Rolling out the dough reminded me of the kids making snakes with clay when they were younger. The snakes were rolled out, then cut in sections and squished a bit with a fork to make dents to grab the sauce. Into boiling water they went, and they sat on the bottom for a bit before floating to the top, where I scooped them out after a minute.

And - we liked it! Served with a simple tomato sauce using some fresh basil from the garden, they had a nice texture and flavour. Pesto next time, maybe? Frost is coming and I need to harvest the basil. With a recipe this easy, I'll be making gnocchi again.

After I get a new ricer.