This month I got to (sort of) re-enact the bit from Julie & Julia where the exasperated Julie says, "I have to bone a duck. Can you even conceive of boning a duck?" Our Daring Kitchen challenge: bone a chicken and make a chicken ballotine. But I used a duck too for good measure. Not all at once, though this is likely the process by which we get that strange culinary extravaganza, 'turducken'.


For the April Daring Cooks Challenge, Lisa from Parsley, Sageand Sweet has challenged us to debone a whole chicken, using this video by Jacques Pepin as our guide; then stuff it, tie it and roast it, to create a Chicken Ballotine.

For this challenge technique took center stage. I have Julia Child's Mastering the Art of French Cooking  and looked through the chapter recipe for pâté de canard en croute, trying to figure out how it's done. Thank goodness for video, is all I can say. While her written instructions are thorough and accurate, it's not likely one I would attempt without seeing it done.

Over the course of the month I made this three times, twice with chicken and once with duck. The first chicken took me over half an hour (with the video), but by the third time I had it down to 15 minutes and was feeling very happy with this new technique. 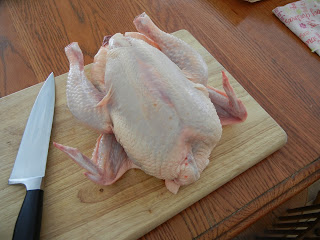 Ready to start! A 6-pound chicken raised here on the farm and a sharp knife. All good. 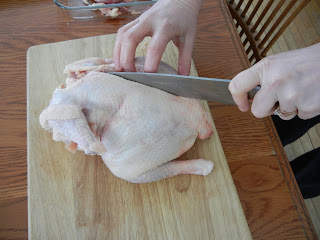 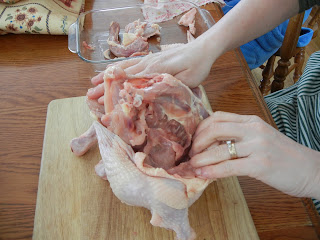 Wing tips cut off, and a cut down the backbone starts the process.

Looks vaguely like Alien erupting from a victim, but much less homicidal. Having cut the shoulder joints, the meat was pulled off the central carcass. This was repeated all around, then the hip joints severed to remove all of the meat from the bones. 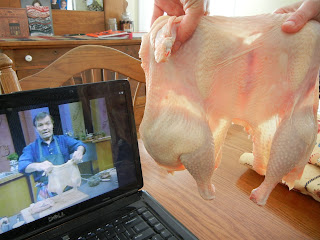 Ta-dah! It looks just like his. In about three times the time it took him, but hey, I'm new at this. The bones were then removed from the legs and the whole thing was like a chicken puppet. The only bones left in the puppet were the little nubs of bone at the very bottom of the drumsticks. 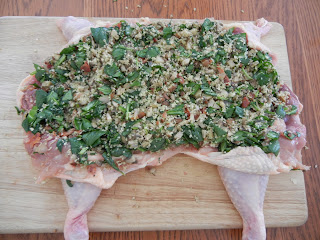 Chicken laid out flat with stuffing. Chopped spinach and sauteed mushrooms and shallots with panko bread crumbs. A layer of swiss cheese over the top, and it was ready to roll up. 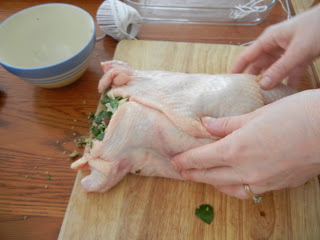 Rolling it all into a nice neat package. 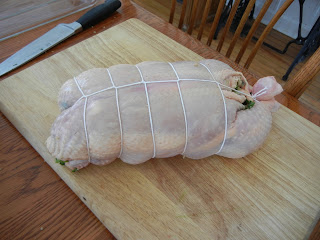 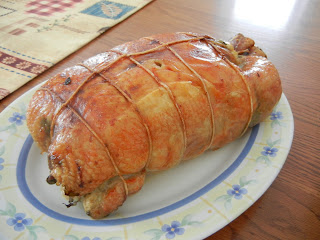 Trussed (note: I am not good at tying half-hitch knots. It was an exercise in trial and error. So if we go camping, don't ask me to tie one unless you plan to wait. And wait.) Ready to roast. rubbed butter into the top of it and roasted it at 400F for about an hour and twenty minutes. 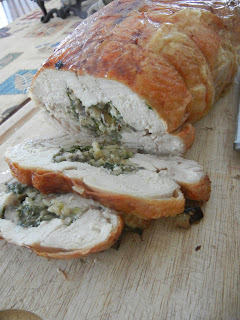 And, sliced. I was so happy with how this turned out. Delicious, juicy, and easy to carve at the table. And it looked good! Roast chicken is one of my favourite meals, but to have it with company is always a little daunting as I am an entirely inept chicken carver and so the lovely roasted poultry coming out of the oven doesn't look nearly as nice when it comes to table.

A ballotine, however, is a tidy package, a cylinder ready to slice and give everyone meat and stuffing. I have a feeling this will become my go-to for company - so easy to serve!


This was a huge hit with the entire family, and even tasted good cold the next day! I can see why ballontine is often a picnic food. 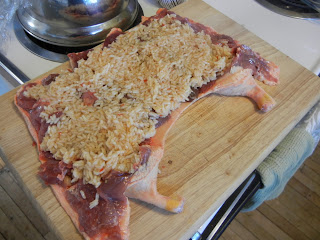 The beauty of learning to do this was, it works for any poultry. The duck seemed to have more sinews and such, but otherwise the anatomy is pretty simliar and all went well. White rice with some sweet chili sauce made for a simple stuffing. 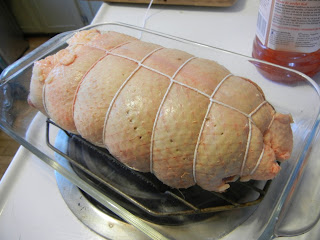 Reasy to roast, the skin pricked all over to let the yummy duck fat escape. No butter needed here, the duck has plenty of its own. Pricking the skin keeps the roast from being greasy. 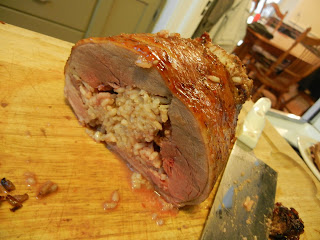 Carved. Again, meat and stuffing easily served. My kitchen will be seeing more of this. Hmm, turkey? Thanksgiving dinner may never be the same.
Posted by barb at 21:01 4 comments: