the end of a (medieval) era

Our two-week Medieval unit stretched to three weeks, between learning and sewing and feasting. All in all, it was a nice break from the regular book and some good hands-on learning. 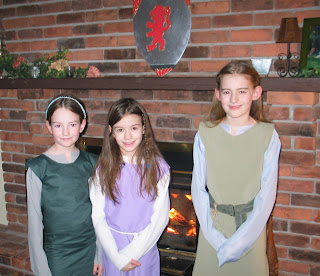 Saturday night was the end of the unit, marked with a feast that itself involved some learning and some new culinary adventures. The recipes were taken from an online search of medieval cookbooks that had the original recipes as well as modern translations.

The dresses were done, much to the girls' delight, and after setting up a folding table and the kitchen chairs in the living room by our fireplace, using a blanket over the window (a poor tapestry, but it darkened the room enough that we could enjoy a fire while we ate) and the shield A had made for last fall's fair as a decorative prop, we were all set to go. We had whole wheat pita bread to serve as trenchers, which the middle ages folks used instead of plates. In view of easy cleanup, the trenchers sat on plates instead of right on the table. Everyone had a goblet for 'wine' (the real thing for Lord Dad and Lady Mom, white grape juice for the girls), a knife, and a spoon for the soup. No forks here, as they weren't used until the 1500s. 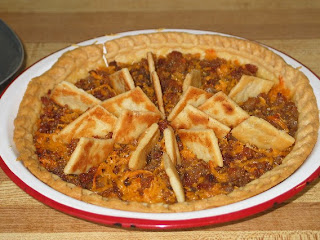 The first course was leek and potato soup, followed by a course of something called 'flampoyntes', a pork pie that had an odd taste but was really quite good. To browned bulk sausage we added cinnamon, cloves, ginger, sugar, and shredded cheese, baked it in a pie shell, and then topped it with diamonds of fried pie pastry. Interesting combination, and the pastry diamonds for decoration were a bit fussy but I liked the look of it.
The original recipe for these, from England in the 1300s, is as follows:
Take fat pork ysode. Pyke it clene; grynde it smal. Grynde chese & do therto with sugur & gode powdours. Make a coffyn of an ynche depe, and do this fars therin. Make a thynne foile of gode past & cerue out theroff small poyntes, frye hem & put hem in the fars, & bake it vp &c.
Simple enough, no?

The third course: first, duck cooked in a wine-onion sauce that again used cinnamon and cloves (apparently this recipe will also work for rabbit, in case you're wondering), as well as wine, chicken stock, and vinegar. Very good and tender, though at first the smell was very heavy on the vinegar and had me a bit concerned. The duck itself was a wild duck shot by Goaliemom's husband and graciously donated from their freezer. I do think I'd cook with duck again. It's got a nice flavor, even in its medieval setting.

Duck was followed by pheasant (another one hunted by GM's hubby - enjoyed with many thanks) which was 'barded',

or wrapped in bacon. Yummy. That's really all there was to it, though the recipe (England, 1400s) had me laughing at the directions. When a recipe starts with telling you how to kill the bird, it's a far cry from modern ones. And this passage: ...breke his necke, and pul him dry, And draw him as a chekon, and kutte off his fete and wings by the body and the nekke, and roste him, and reise his winges and his legges as a heron... gee, I'd love to, but I'm really not up on preparing heron for eating. Or crane (as in another recipe), for that matter.
'Eating pheasant' also led to a fun discussion on the importance of the letter 'h'. Think about it.
Along with the meat was 'pescodde' (France, 1300s), a dish of pea pods cooked in water that first had boiled some bacon. That was simple and good. We only had one veggie dish as feasts for nobles ty 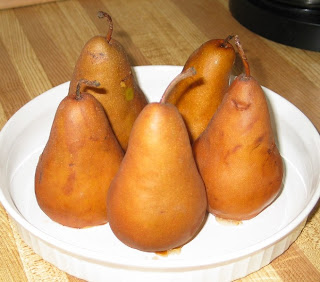 pically were mostly meat dishes.
Finally, along came some baked pears. Apparently, pears and apples were believed to have medicinal properties and were a common finish to feasts.

All in all, the unit was good and the extra learning a welcome addition. The food was good - different, but good - but they certainly had no concerns about their fat intake. One of the benefits of a very active lifestyle, I guess.

Thanks for giving us all the details. I'm very impressed that you were able to make your pork pie from that recipe you gave. Well done. Sounds like an enjoyable evening.

Thanks, but I can't take credit for following those recipes as they were; the site had the original text as well as the modern equivalent that was a much more familiar format. It was funny to read the old ones, though.

I have another cookbook with old recipes from the Loire Valley and so many of them start with "start with a knob of butter the size of an egg..."