I overcame my fear of soufflés with a Daring Kitchen challenge, but had wanted to try some other varieties. Okay, 'fear' is a bit extreme, but I certainly never felt equal to it until I tried. So there's a lesson to take away - so many of these intimidating foods can be made. Just read up and try it. Yes, really.

This week, I've found myself cooking some recipes I short-listed from France: a Journey for Food Lovers that I recently picked up at, of all places, Costco. I picked it up partly on the basis of every recipe being photographed, and also in the fact that it covered several duck dishes, venison, seemed accurate in French recipes that I knew, and had a 'basics' section a the back with various pastries and mother sauces. And so far, it has not disappointed (three recipes on Saturday alone. Yes, that was a bit of overkill. But the petits farcis and tarte au citron will be made again. So good!). Tonight was no different as I made the crab soufflés.

Soufflé is, I've learned, basically two parts: egg whites, whipped (no oil! at all! no no no!) and the other part with the oil and fat - the yolks, the sauce made with butter and flour, the seasoning and flavour. Milk was heated with onion, peppercorns, cloves, and thyme (standing in for bay leaves. How on earth did I run out of those? I always seem to have a veritable tree-full) and left to steep, infusing the milk with taste before it was strained to be added to a roux of butter, flour, and shallot. Egg yolks were beaten in, crab meat added, and all was yummy.

The whites of the eggs were, in turn, whipped to soft peaks. Normally I'd haul out the trusty KitchenAid mixer, but decided from sheer bravado (read:stupidity) to whip them by hand. Good bicep workout, I can safely say. I did also justify it on the basis of less effort in the dishwashing department, but I think my arms regretted that logic.

Then it's simple. Part A meets part B and is folded in so as not to wreck all that nice air that the egg whites are holding.

Into the buttered ramekins it goes, and baked. And - poof! Soufflés! These with a salad courtesy of the girls (romaine, tomato, and blue cheese) made for a delightful supper.


They're not as intimidating as you'd think.

I've been meaning to make 'real' pâté since I first did a veggie one for a Daring Kitchen challenge. Today was the day. I like the pâté from the grocery's deli, but wanted to try my hand at it. Here's how it went down, with sous chef A ably helping out. 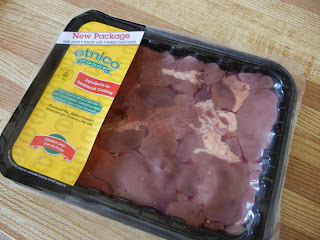 Chicken livers. Not an auspicious start, really. Granted, this whole package cost about the same as the single slice of pâté, so this is already looking more cost-effective. 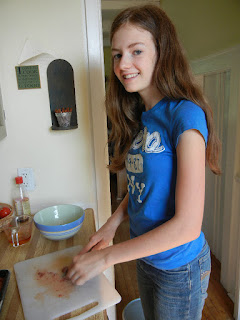 Cut up by A. Who I think enjoyed it far too much and was not at all grossed out. 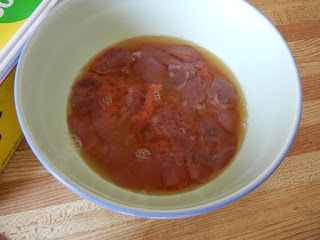 They then soaked in brandy for two hours. I figure we're avoiding the middleman and letting the alcohol damage the liver directly with this one. 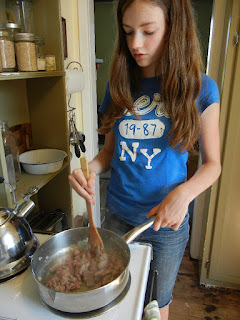 Brandy drained off, and livers cooked with onions and garlic before the brandy returned to simmer away. 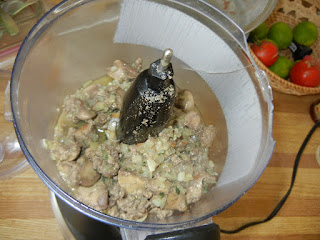 Then into the food processor. Yes that is a strip of duct tape on my food processor. DON'T JUDGE ME. And yes it looks rather unappealing. Believe me, it looks worse after it's puréed. I had to block out several images, several involving diapers, with that one. Butter and cream were added and blended in, then seasoned with salt and pepper before heading to the loaf pan to chill until it set.

I had thought of making a lovely port wine gelatin to make a decorative top, but then realized that should have gone in the pan first and besides, I'm still trying to figure out flavour. 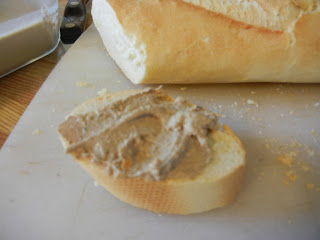 And here it is on a baguette at supper! It was good, though a bit more liver-y than I'd prefer. However, my teens liked it! Both A and M gobbled it up and came looking for more so I guess it was a success. The next take (yes there will be one; I'm determined to figure out one I like) will not be as smoothly puréed. I think I'd prefer a rustic, more textured version.
Verdict: back to the drawing board, but with some good ideas.
Posted by barb at 19:23 No comments:

I've seen this referenced in quite a few recipes, so wanted some when I made the last tarte tatin. Because that's my one of my stringent criteria for trying new food (right up there with, 'hey, this sounds weird...'). Problem was, my little local grocery store didn't have it, and from the sounds of things it was pretty pricey anyway.

What is it? Crème fraîche is a cultured cream: cream and bacterial culture. It's tangy, but not so much as sour cream. That's really about it. Texture may vary, and the labeling is regulated in Europe and several types acknowledged in France.

Thanks to this video and several articles, I figured tackling it on my own would be no problem. It is as simple as promised. And there's something about making this that feels ancient, homestead-ish, and basically awesome, cooking-wise.

One cup of heavy (whipping) cream and one tablespoon of buttermilk, stirred in a cup. While different sources altered the proportions slightly, there's not much more to it. The trick, though, is in the magic that happens over the time it sits on the counter.

That's right, this all-dairy product sat on my counter. For about two days in the summer. This was my biggest barrier: overcoming years of the "put it in the fridge or it WILL SPOIL and you will GET BOTULISM and NOT THE NICE BOTOX KIND" mentality to give the bacteria in the buttermilk a chance to warm up, hang out, and do their thing. Hooray for fermentation!

The first day, no noticeable change and it still looked like heavy cream. Over the course of the second day, though, it had thickened into a consistency like a sour cream or Greek yogurt. Instead of spoiling or curdling, it had melded together into something new and delicious.

To say it tastes like sour cream isn't right. Its texture reminded me of Devonshire cream, smooth and thick, but it had a gentle tang to it (hence the common substitution of sour cream that's often suggested) combined with the sweetness that comes from real, honest-to-goodness cream. I quickly stashed it in the fridge before the first spoonful turned into a second, and a third, and so on. According to my sources, it keeps in the fridge for about 10 days.

As for making subsequent batches, one site suggested using the last bit of the crème fraîche as a starter and adding new cream, to let the flavour mature much like a sourdough starter. Oh, how much I have to learn. Apparrently the taste is even better with raw milk which, until I start raising cows and milking my own, is very hard to come by around here. Thanks, Big Brother! (sarcastic? who, me?)

Now to use this stuff. So far I've seen:
- used to enrich eggs Florentine, from Gordon Ramsay's Fast Food cookbook, will be trying that one soon!
- stirred into hot pasta with herbs for a creamy sauce
- on potatoes instead of the usual sour cream
- sweetened slightly, topping fruit or a tarte tatin
- a dollop stirred into a cream soup
- used to thicken sauces, since it doesn't curdle over heat
- ... and I will have to find more. I'm thinking it will be nice on tea biscuits to nicely contrast the sweetness of jam.