Summer is here, and this month's cooking challenge was one that for our family is closely tied to warm days of eating outside, enjoying food off the grill: potato salad. The one I make and grew up with is a creamy combination of potato, egg, onion, and mayo, along with a few other flavourings. The twist on this challenge, though, was to make it healthy.

Jami Sorrento was our June Daring Cooks hostess and she chose to challenge us to celebrate the humble spud by making a delicious and healthy potato salad. The Daring Cooks Potato Salad Challenge was sponsored by the nice people at the United States Potato Board, who awarded prizes to the top 3 most creative and healthy potato salads. A medium-size (5.3 ounce) potato has 110 calories, no fat, no cholesterol, no sodium and includes nearly half your daily value of vitamin C and has more potassium than a banana!

While there are lots of different takes on potato salad around the world, including hot ones with oil dressings, and many kinds of potatoes to choose from, I opted to take our family fave and make a lighter version.

Boil potatoes in salted water just until tender. Cool, cube, and combine with all vegetables. Mix the dressing ingredients until smooth and stir to coat the salad. Chill for a few hours or overnight.

It was simple, and we all enjoyed it. While I missed some of the mayonnaise-type flavour, this was a nice change. The dressing was creamy and had a pleasant tang to it and - surprise of surprises! - my yogurt-hating hubby really enjoyed it and said I should keep making it that way. So that, in and of itself, spoke volumes for the taste. It's a snap to make and will be one we enjoy a few more times this summer.

D took him to the vet who confirmed not only the diagnosis, but that it was very aggressive and one of, if not the largest such tumors the vet had ever seen. Our hard decision, while still painful, was confirmed and as planned if that was the case, D had him put to sleep while there. He brought Samson home and we buried him down by the creek, beside Tasha's grave. He had run along that stretch many a time in his life here.

I will miss the way he romped with the girls, picking up a log or large branch and carrying it around before dropping it with a thunk at our feet, then sitting back on his haunches and staring fixedly at it, waiting for us to throw it. If we weren't fast enough, he'd nudge it with his nose, then sit quickly and politely back, perhaps with a small whine as if to say, "there it is! I pointed it out to you. you can find it now, and throw it for me! hooray!"

I will miss the feel of his warm, thick coat and silky ears.

I will miss the way he would lick the remnants out of a tuna can, chasing it around the floor and getting every bit out.

I will miss the way he was a loyal companion to our girls, playful and gentle with them, protective of his charges.

I will miss the way he would pounce on toys with both front paws, then freeze until he was sure (or thought he was sure) he had it.

I will miss the lunk-headed things he did (most of them, anyway), making us shake our heads in disbelief while we smiled and had a laugh.

I will miss the eagerness with which he joined me on my morning run, his face alight and panting with that big goofy smile of his, and making me feel a bit safer by his very presence (who wouldn't feel safer with a hundred-pound German Shepherd?).

I will miss his puppy kisses, slobbery as they were.

I will miss the way he chased things in his sleep, his paws twitching as he was in hot pursuit in his dreams. He did that earlier today, one final chase - and it made me smile that he got one more. I hope it was a fox.

I will miss him.
Posted by barb at 18:34 No comments: Link to this post 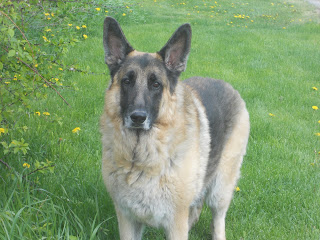 Our pretty boy dog, whose goofiness and occasional idiocy have been cause for laughs but who has been such a good dog, has cancer. An aggressive form that has, quietly and insidiously, grown on his spleen. We had no idea until he couldn't walk this evening and we made an emergency trip to the vet. Spleen hemangiosarcoma.


It's in constant danger of rupturing and causing him a slow, painful demise by internal bleeding. A canine time bomb of sorts, something we don't want him to go through. And so tomorrow, if our family vet confirms the diagnosis, we say goodbye to Sammy. 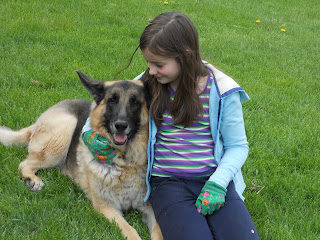 Tonight, we sat with him and shed some tears together. There will be more to come.
Posted by barb at 23:56 No comments: Link to this post