What a change a week makes. Seven days ago - no, make that four - our farm was a winter wonderland of snow with high drifts, huge piles, and the fields an expanse of white. The the thermometer started climbing and the rain and wind came.

A check in the basement the first night was a good thing as we realized that the sump pump, try as it might, was not getting the water out fast enough. I sat downstairs and could hear the water trickling in. Really, should one see currents in the basement? Just as I started giggling about having our own underground lake and singing songs from Phantom, D had the good idea to check outside for snow blocking the outlet, and sure enough, the blockage was cleared and out went the water. The Phantom will have to wait. 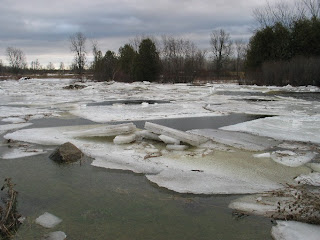 Most of the snow has gone and the creek has become a swollen, rushing mass of water that makes it hard to remember its softly trickling July days. It has crept steadily up its banks and reached the fencing that is usually some nine or ten feet from the water's edge. In some places it is twenty feet back from its normal boundaries. It's like spring melt, but with the knowledge that winter isn't through with us yet. I'm trying to recall our first spring here, which is the benchmark of high water for us. It's as high, or possibly higher than that now.
I find it funny and amazing how the water goes. It finds the ditches that we've forgotten about all year and follows them along to the creek, but on the way they get backed up a bit and so fields end up looking like a wetland. The ice from the creek's surface gets broken, flows along, then jams up to make sculptural piles as the water rushes under, around, and over it. Islands appear as the water finds alternate routes down the creek.
It has its own beauty, and the walk through the mist and 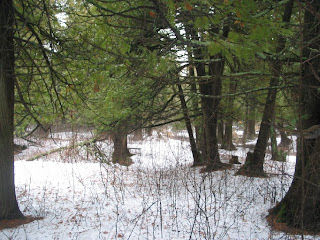 dripping trees was magical, despite the cold wet feet I got from stepping in puddles that were deeper than I thought. The atmosphere reminded me from something in a story - mysterious but beautiful. Sort of like you were being welcomed in to a mythical place, but had to watch how you behaved if you wanted to stay there for a while.
The cedars stood out as a lovely damp green against the fog and melting snow, and the creek just rushed on and on. I still love to go for walks and marvel at the fact that this place is ours.
Yesterday the wind joined in the fray, pulling up roofing that I screwed back down (just on the breezeway, so I could get up on the small ladder), pulling up more roofing on the back of a barn that I couldn't reach, pulling a screen off a window, and bringing down more than a few branches. D had to move a couple 6-foot lengths off the laneway on his return home.
Today is sunny and peaceful, just around freezing. The fields, I notice, have absorbed or let the extra water run off and look drier. It was an interesting two days.
Posted by barb at 08:33

The pictures are such a nice addition. I'm glad you have a digigal now. It's nice to read about the snow and ice, and the change of seasons (which will change back again very quickly, I'm sure). But I'll take 72 and sunny, thank you.