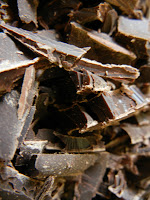 It's D's birthday today, so yesterday I found myself thinking yesterday that some sort of cake was called for. What to make for him... so I laughingly thought, if only I could make bacon into a cake! I mean, bacon? Of course. It makes everything better. My initial thought was to make a rectangular cake, then use colored strips of fondant melded together to look like a slab of bacon.

Then I realized, that would be cruel. The next thought: chocolate cake. With bacon. And I'm pretty sure a light bulb appeared over my head. The bittersweet flavour or chocolate should work beautifully with the smoky saltiness of bacon, right? I love sweet/salty combinations.

A little internet searching later and I found that my idea was not so original; other people had made various takes on the concept of chocolate and bacon. But the cakes looked too fluffy for what I had in mind. Instead I turned to a recipe from a lovely book passed along to me by older sister S. On Rue Tatin (by Susan Hermann Loomis) is a great combination of story, food, and recipes, one of which is for a gâteau au chocolat rich in chocolate and dense in texture.

So. I made two cakes, then took more dark chocolate that I melted with hot cream to make a ganache. Ganache is one of those things that is just simple and amazing (aaah French food, you've done it again). Chocolate and cream and butter, to which liqueur or brandy is often added. I added bacon. Of course. 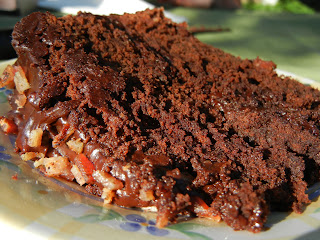 A few slices were cooked, thoroughly drained and blotted, and chopped fine. The ganache was the filling between the layers and the top frosting. Feeling vaguely like the guys on 'Epic Meal Time' I cooked and crumbled more bacon to cover the top. A sprinkling of fleur de mer to gently enhance the saltiness finished it off.

The result? The name had us laughing, the cake looked phenomenal, and the flavours worked as I expected. The drawback: the chocolate was a bit too rich. A sliver would be enough. But in those bites that gave you the mouthful of chocolate, then smooth ganache, and finished with the bacon smokiness at the end, we had 'wow' moments. 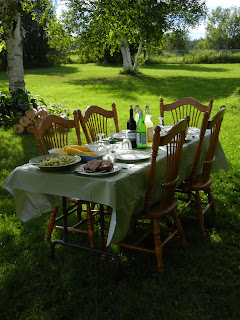 We enjoyed supper al fresco, setting up a table and chairs on the lawn in the shade of the trees, popping open bottles of Rieme French sparkling lemonade (picked up on a whim and a new family favourite), Pellegrino, and a nice red wine from Jabulani Vineyards. We feasted on grilled corn on the cob and steak, with some pasta in a pesto I had made from basil in the garden.

The mosquitoes obliged and stayed away, so we could relax and enjoy a lovely meal outdoors. Then the kids got silly so D threw them in the pool.

My birthday's in March....maybe not outdoors, but the rest sounds fantastic

Awesome! A memory has been made!

Reading about these flavours was in itself a treat for the tastebuds. Happy belated b'day, D!

From your summer-silent writer-friend across the prairies (yes, BG, we do live too far apart)